Various Memories of my time being into the series!

I remember being glued to the TV when Cartoon Network had a nonstop Pokemon anime marathon with all the episodes that were dubbed at that point airing nonstop in order from the very beginning to hype up the release of the Diamond and Pearl anime here!

I went to the Pokemon Platinum launch party at Nintendo World!(Back when it was called that) I won prizes as well as got some promotional goods, and we got the game a day early! want to take photos of these goodies sometime soon!

I also went to the Pokemon Black and White Tour, I had a ton of fun! I got a Oshawott Plush I still have to this very day along with other promotional goodies. I want to take photos of these goodies sometime soon too!

My Squirtle evolved into a Wartortle shortly after I beat Misty. I remember being very, very excited. I went to Psypoke and Serebii a lot at the time too since my friend showed me those sites. I went on one of the two(I think it was Psypoke but I really can’t remember)to see when Wartortle would evolve. Seeing how cool Blastoise was my impatient 8 year old mind wanted to get one asap, so I literally spent 1-2 (maybe even 3) hours grinding him until on route 9 until he reached level 36 and I got Blastoise. Not kidding, two gyms in and I already had a Blastoise because I was so excited to have one. Since he was so powerful I used him for all my battles until I got to face Erika and she constantly kept kicking my ass. Ten year old Linky then learned the importance of types and training your Pokemon evenly and not to rely on just one.

This is about Rock Tunnel. I didn’t know where to get flash at the time(even though I could have just looked it up), so I made the decision to go through the tunnel without it since I really wanted to progress. Ten year old Linky was just like that. My journey through the tunnel took three days, I remember feeling so overjoyed to finally get out of there. And then I felt really stupid when I got flash later.

My original Soulsilver cart got stolen by a shithead kid, I had tons of cherished pokemon on there. Thankfully I was too stubborn to mirgrate my childhood team, so I do still have my old team and first pokemon SQURTO(All caps) to this day! But I was VERY close to just giving up on pokemon entirely, because it was such a devistating blow to my soul. But then shortly after, Pokemon Black and White were announced in CoroCoro magazine. I decided not give up the series so I could play these games. I am glad I didn't give up, Pokemon White revitalized my love for the series tenfold. Gen 5 is very special to me for many reasons and this is a massive reason why.

I went to the Pokemon Regionals in 2011. I prepped for six months in advance, and I ALMOST made it to the top 16!! I was bummed I didn't make it into the top 16 at the time, but I was still very proud. And I still am too this day, even more so now because me back then didn't know jack and shit about the meta, and I had a very ragtag team of Pokemon in my white version, which you can see here! This was my team in that game: 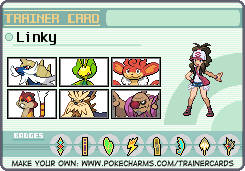 I also met a dear friend at the regionals, who I am still friends with to this day all this time later.

Back to top of this page!