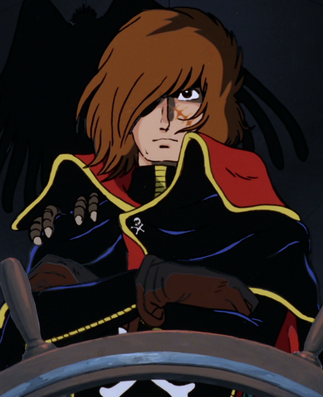 Captain Harlock is another character who means a lot to me. He is many things: badass, inspirational, fascinating, and iconic. Along with more words I cannot currently think of.

His development is utterly fascinating. Harlock as a character goes back as far as the 1950's with his earliest appearance being as Captain Kingston in 1956's 'Adventures' Manga. Harlock is a character Leiji has toyed around with in various "Proto Harlocks" as we in the Leijiverse fandom typically dub them.

Some other notable Proto Harlocks include the ones seen in Space Battleship Yamato and Gun Frontier. Also worth mentioning how the illustrations Leiji Matsumoto did for Japanese translations of various CL Moore Northwest Smith stories, Smith himself looks incredibly similar to the archetype Leiji draws with Harlock and his various Proto Harlocks.

I'll link some pages that go more in depth about his past prototype iterations before the space pirate we know and love today: X X

Back to the Harlock we know today... I love the many forms Harlock can take. Each one can have their own quirks for each specific iteration. Examples: Aomy/SSX's Harlock being in the more heroic and swashbuckling side, The Dorkiness that shows from times in Younger Harlock in Cosmo Warrior Zero, Original Manga Harlock's more mischievous streak, he's more of an antihero compared to Aomy/SSX Harlock, 78 Anime Harlock is relatively similar to his manga counterpart. But I would say he's not an antihero like in the original manga version, he is more in the heroic range but not exactly like Aomy/SSX Harlock. (And both original manga and 78 Anime Harlock need so much therapy)

There's even more I haven't listed. But despite the quirks of each specific one, the core of Harlock is always true: His resolve is rock solid. He fights for what he believes in, what is in his heart under the flag of freedom, and cares deeply of the people of the earth. Harlock despises and actively fights against oppressive forces of all kinds. He very much is a man who is out to protect and fight for the vulnerable and oppressed.

His design is nothing short of utterly iconic. His flowing high collared cloak, the skull and crossbones on his chest, the scar across his face, his hair mostly covering his one eye with an eye patch... He just has one of the best character designs EVER.

Harlock's two iconic weapons he always dons: the Cosmo Dragoon and Gravity Saber are truly deadly in his hands. While they are already incredibly powerful and revered weapons in the Leijiverse mythos, when Harlock wields them with his skill and mastery their power is increased ten fold.

Harlock talks about "Being a Man" often, especially in the original manga and 78 anime, and his (and Leiji Matsumoto's definition as a whole) of being a man and masculinity are INCREDIBLY good for the time. I can't even state it enough (Keep in mind this is the 1970s!!) Being a Man is about good general traits of character, helping the vulnerable and oppressed, and sticking to your beliefs and fighting for what is right and what is in your heart. I will hold off on talking about it more for now since I intend to write an essay going very in-depth about this in the future. I will just say it's absolutely incredible.

Harlock is an inspiration and a character I aspire to be such as Maya. His strong and unwavering resolve, courage in the face of adversity, his drive to protect the people, to fight for what is in his heart, and to live free. Harlock is also just absolutely cool and badass as fuck, and I want to be a fraction of how cool he is. Him as a character and what he stands for will always deeply mean a lot to me and will continue to inspire me until the end of time.

Captain Harlock is one of my favorite characters of all time, he is up there sharing the spot with Tochiro, Maya, Emeraldas and Link(They all share the Number One slot I cannot pick just one). I could truly talk about him forever. He is a character who is absolutely iconic and incredible, and one that means so much to me. Harlock inspires me to fight for what is in my heart, and to live free under my own flag.