Mobile Fighter G Gundam is a good anime. A damn good one. I just wanna ramble about it for a bit. (Warning: Some spoilers will be mentioned about here!)

I started watching this anime back in February. Due to my neurodivergent ass it took me until September to finish it, I've always took a while to finish shows, and have a deep hatred for how social media has made me feel like I need to finish things in a shorter amount of time, because it feels like everyone else is faster, but that is a topic for another blog post. 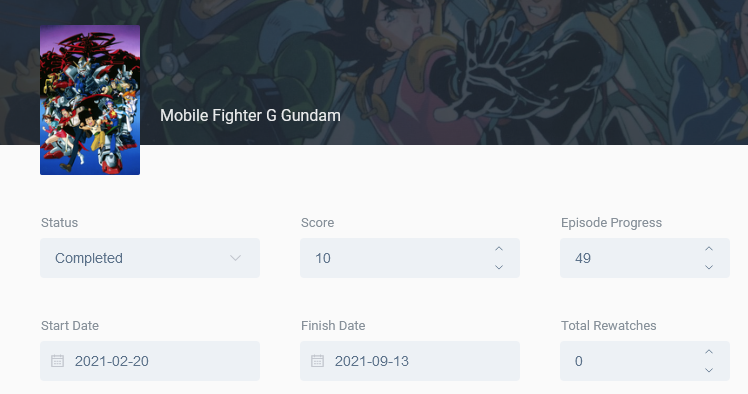 (My Anilist stats for this, along with the start and end dates)

The show is very different from your standard Universal Century fare, or just standard Gundam fare as a whole. I would say the closest over show I know that would be like this is Build Fighters. Which I have not seen yet but I know it has many callbacks to G, alongside the whole Gundam franchise.

Here is a except from the Wikipedia page about it's plot: “The series is set in the "Future Century", where space colonies representing countries have agreed to hold an organized fighting tournament known as the "Gundam Fight" every four years to settle their political differences in place of war. Each colony sends a representative fighter piloting a giant, humanoid mecha called a Gundam to battle on Earth until only one is left, and the winning nation earns the right to govern over all the colonies until the next tournament. The events of G Gundam follow Domon Kasshu, the pilot of Neo Japan's Shining Gundam during the 13th Gundam Fight. Domon's mission is to both win the tournament and to track down his older brother, who is believed to have stolen the mysterious Devil Gundam (AKA the Dark Gundam outside of Japan/Asia) from the Neo Japan government.”

G Gundam is not everyone's cup of tea, especially if you are more of a fan of Gundams usual fare. It is a lot more over the top, bombastic, and incredibly shounen anime. It can get very super robot too, especially towards its end. But I eat that shit for breakfast. Always have. But this show should not be slept on in my opinion.

(This was one of the greatest things I ever witnessed. I cannot describe the noise I made with words.)

This show has a lot of heart too, and will pull at your heart too. Such as the death of Master Asia, who is one of the most well known and iconic characters from the series. He and Domon are in the most merch (I swear P-Bandai PLEASE give us merch of the other shuffles too. No hate towards the wing boys I'm sure they're alright, but please give me more shuffle alliance merch. I'm begging you. PLEASE. ALSO GIVE ME NASTASHA MERCH PLEASE I AM DESPERATE AND GAY)

His death fucking destroyed me. I have known he dies from the Literal First Second I ever saw his character which was in the game Super Robot Wars T. Because people ask Master Asia the second he shows up in the story: "How are you alive??" But even if you know. You will not be ready. I am still shocked I didn't wake up my family with my wailing. I haven't cried THIS hard with a fictional character's death in a good while.

This show also has a fantastic cast of various loveable characters. From main characters such as Chibodee Crocket, with his deep determination towards accomplishing his dream, as well as having a big and fun attitude and being very expressive in the show.

Wong Yun Fat, a villain who shows up later on in the story who is a fantastic Bastard Man. But alongside being a high quality bastard he also can act childish, he is an incredibly fun and good villain with a lot of emotional range. High quality bastard right here.

Even side characters who show up with very little screen time such as Hans Holger who shows up in episode 29, and once more near the end, he is incredibly memorable and lovable. He also has a Gundam I love to death: the Mermaid Gundam. While he has very little screentime as a whole, he is a side character that definitely leaves a lasting impression.

Argo Gulsky is a space pirate, if you know me, you'll know I was already on board with him from second one. He is a big, towering man, but within that massive exterior you'll see a man who just wants to save his space pirate crew. And is incredibly determined to get to his goal.

And to Master Asia, being one of the most well known characters in the whole show, and for damn good reason. He is a hammy king that has a fantastic arc throughout the show, and is another fantastic antagonist in this show.

This show has so many wonderful characters that I still do not know who is my personal top favorite. And to me that is a sign that you have made a damn fantastic cast of characters for the audience to get to know. 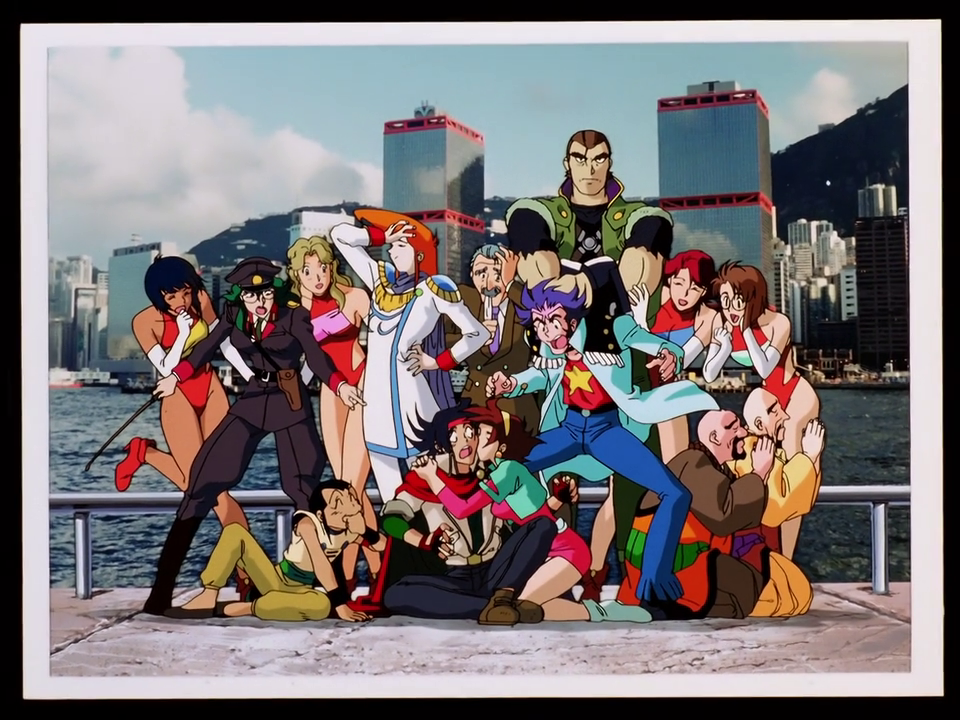 (A incredibly charming screenshot from the second ED)

G Gundam also has many of my favorite mechs in the whole franchise. To me the original Mobile Suit Gundam and G Gundam have the best mechs in all of Gundam and I will fucking die on this hill. They both have incredbily striking mecha designs. I'm sorry but with every Gundam show outside of these two, they all blend together for me, with some exceptions such as Quattro's, Haman's, and Cima's own mobile suits.

(Rose Bits > Fin Funnels. I love the Fin Funnels but Rose Bits are roses so they are superior to me.)

The ost is also composed by the legendary Kohei Tanaka. One of my favorite composers of all time who did the osts for Gunbuster, One Piece, Patlabor, and more. Ever track in this anime is just God Gundam tier. The second OP, Trust you forever, is one of my favorite OPs of all time now. It's amazing.

I could truly go on about it forever. This show kept me sane in this hell year. While I took a bit of time to finish it, this show was always in my mind even when I wasn't watching it, and I know it'll continue to do so. I was incredibly emotionally invested from episode one, cheering, crying, screaming and more at my screen. I haven't experienced this in ages with an anime. It takes me back to my teenage years when I binged so much One Piece. (God I wish I had that amount of focus and free time again...)

This show was a delight from start to end. A delight of a show that's full of heart. It is definitely worth your time checking out, this show is slept on way more than it should be, it may not be exactly for everyone but it's worth giving it a shot. And through it I’ve met some truly incredible people I am happy to call my friends. Friends that I will hold dearly for ages, friends I am deeply grateful to have met. Their love for this show, and certain characters in it, enhanced my first viewing of this ten fold.

I know G Gundam was definitely for me, and it has become one of my favorites of all time. It is 1000000% my type of jam that I just eat up completely. I am forever grateful for how it has kept me sane this year, and for the wonderful people I've met from it. This show will have a special place in my heart for many, many years to come.