You can read the first volume of Social Media Sucks Ass here.

So lately I have heavily cut my time off Twitter. I have realized how easy it was for it to trigger anxiety attacks, even with blockchain, muted words and more, Twitter thrives off of negativity for engagement. As it's what seriously makes them money. All enagement is good engagement when it comes to profit, doesn't matter the damage it'll cause. Another reason I hate Web 2.0 and 3.0 so damn much.

Let me tell you, it makes a whole damn difference. It SERIOUSLY does. I have the app uninstalled from my phone, and I plan to never reinstall it again. If I ever use Twitter its on the desktop web and mobile web versions. The mobile web version is shit to use but I'm sure it's so they entice you to use the app. Joke is on them, it helps me! Makes me use birdhell dot com less! Which is what I want! Fuck you Jack!

While not traditonal social media(I think???) Discord is on thin fucking ice with me too with their NFT bs too. The CEO looks like he isn't gonna do it...for now at least. But Discord is on real fucking thin ice now to me. Instead of trying to address actual issues like rampant scams and accounts getting hacked, the CEO wants to do this. Thankfully the employees of the company had no idea eiher and were just as livid as many users. I felt bad so many of them got harrassed on Twitter. Many pubicly spoke out against the CEO wanting to do this, and it looks like he got a lot of heat from people within and out the company. 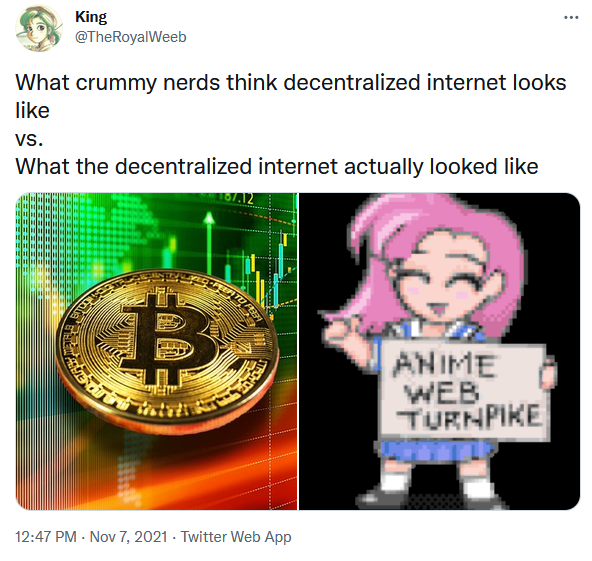 (This is a good image, love to see Trixie Turnpike be in a viral tweet. Here is the og tweet too.)

Honestly if I had the mental energy to, I would make a Leijiverse message board or something. But I just stepped down as the head mod of my own discord that I created three years ago centered around the Leijiverse, because my offline personal life is too much right now. If this were to be made for the English speaking Leijiverse community, someone else would have to do this task. (There is TokiNoWa but it is a French messageboard, and I forget if there is a currently around Japanese equivalent.)

I sadly just cannot moderate another different chat platform with how my life is right now. It really frustrates me that I cannot take action with this, because I am livid with discord and want to help find more ways to interact with and connect the Leijiverse community. But I will be kind to myself about it. My life is a lot right now so it's good I am looking out for myself. I'd rather let someone who is mentally and emotionally capable of doing such a task handle it, it would lead to a better platform for the community in the long term.

Back to birdhell though, I like to call Twitter that. Cutting time from it has helped me so much. I feel bad in a way, I have mutuals and friends I wanna see their tweets and interact with their posts, but this is the best for my mental health that I heavily cut my time on there. They are all super understanding though and I do have alternate methods of communication too. I've been told by some too they admire my ability to have cut the mobile app out of my life and not go back to it. While I do hop on, my time there is way less than it used to be. I'm tired of feeling dread because of the app, and seeing bad takes no matter how hard I curate my feed. I usually see these now because I see people QRT to dunk on these takes, which you should NOT do!!! It only boosts their engagement and gets more eyes to see it!!

I developed the habit of whenever I see a shit take, I block, and the immediately go to do something productive. Code for Neocities, play a game, doodle if I can, just do literally anything else to get my mind off it. It's helped me a lot. Twitter, and social media as a whole thrives on giving people misery in various ways. It's what drives the most engagement, which in turn, gives them the most profit. Look at the information that has been coming out about Facebook/Instagram as just one example.

I am glad I've been cutting my time from Twitter heavily, I plan to delete my Facebook soon after I get the needed contacts. I will probably delete my instagram too. I see a improvment in my mental health by just being on social media less. Once again: Social Media is designed to put engagement over all else, no matter the type. It's what makes them money, and its been proven time and time again giving the time of day to a shit take actively makes Twitter boost it, even if one dunks it. Giving engagement to shitty people only amplifies their voice, due to the design of Twitter, or any social media platform. Shitheads are just super vocal already, and social media doesn't help that either, it actively gives them more of a platform because in turn it boosts their profits. Big Tech does not care about the damage it causes, until it hurts them in profit. That is just the hard and sad truth of it all.

The negative impact social media has on us all cannot be stated enough, and cutting it down significantly in my routine has left a noticeable improvement on my mental health. It has definetly helped in a good way. Of course it will not solve all my problems, but any way I can cut my stressors in life is always a good thing to help with my recovery. And along with cutting down or off social media, I swear if you just curate your online experience, just block/mute what you don't wanna see, and be respectful to people, your online experience will be so much better too. That also helps a lot.

This is what I've just been focusing on especially this and last year. Shits been utter hell for me in the real world. So I'm working on trying to have as much as a refuge I can when I'm online. I've got enough going on irl, so I work at making my online experience just talking with cool people I've met, seeing cool art, and lots of bunny pictures. And if also cutting my time on social media down helps give me that refuge I want for my online experince, I will do it. And so far it really has helped me.

Omoulo here on Neocities has a page called digital wellbeing, which is a page full of resources to help people who worry about social media (as well as technology as a whole) and their relationship with it, as well as how it affects them. It is a wonderful and great resource I appreciate a ton, it's seriously worth checking out. I will link to it here.

I've got a very limited amount of spoons, and am already dealing with so much in my real personal offline life. So I'm working at taking care of myself however I can. You should too.